Sydney-based, ‘singin’, songwriting’, producin” girl, Josie Mann (also known as Jofi) is in her last year of Composition at the Sydney Conservatorium of Music.

I am drawn to her musical style. At times ethereal and at times playful, her tracks emphasise rich, beautifully-woven harmony, delicate melodies, and relatable themes.

She brings me up to date on life and music through the spring sunshine in Hyde Park.

I snap some pictures to mark the occasion: she is in high spirits, and low-slung jeans.

Jofi, tell me about your experience of music-making during isolation.

I guess because the other aspects of my life have been put on pause, isolation time was really productive. The retail job that I had stopped, so that spare time went into music-making. It was an opportunity to go all out!

And you’ve still been studying (albeit online)?

Yes, although none of my subjects this year have been performance-based. So that worked out.

What have been some of the challenges, or quirks, of online learning?

I think I would really struggle if I was a tutor.

I was asked this really tricky question once… and my video wasn’t on… I had a complete freak-out moment where I didn’t know what to say, so I just had to pretend I wasn’t there. 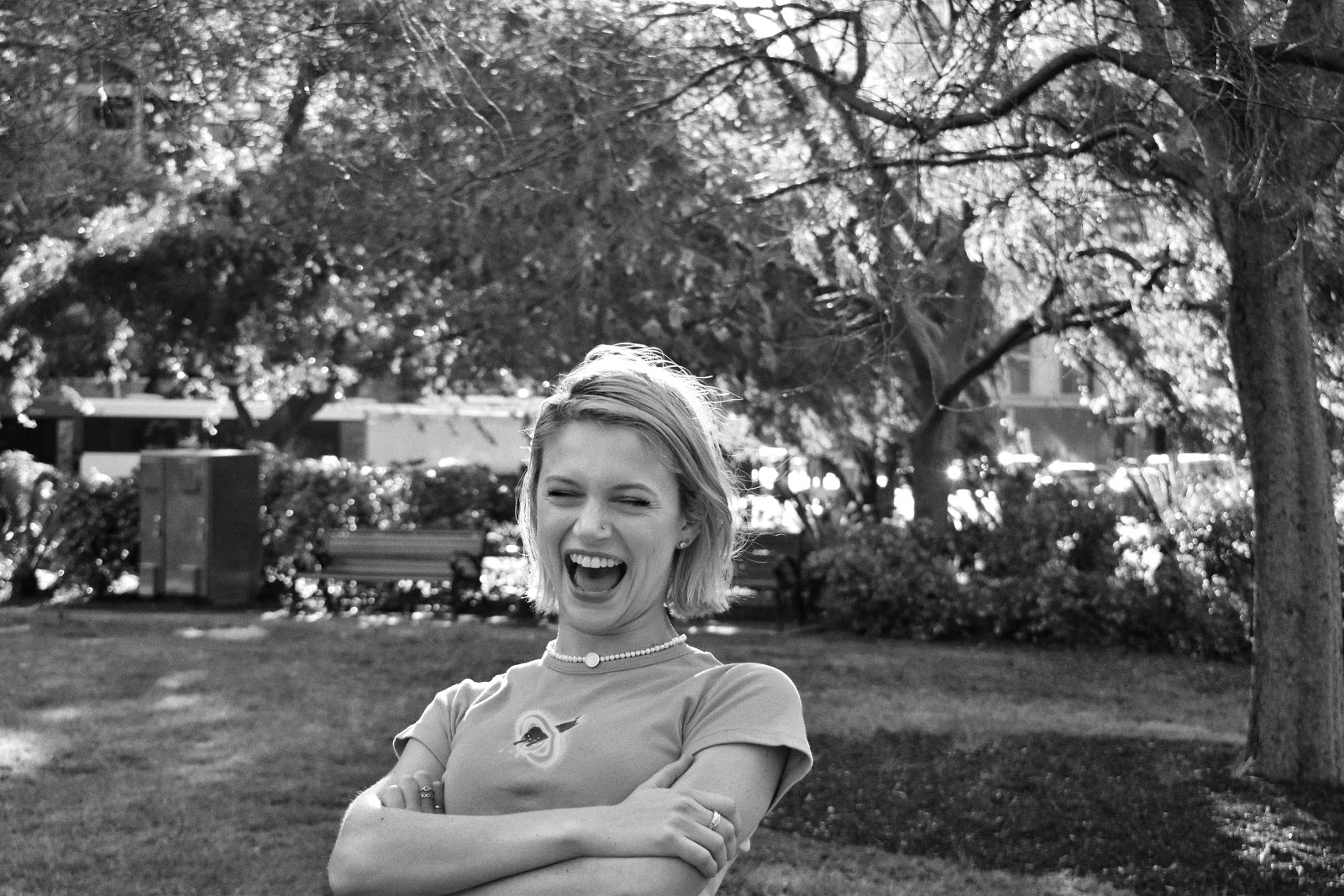 What is your great love? Writing music, or singing?

My musical interests are quite broad.

Now that I’ve been through my degree, I really love creating. I feel that if I had done a vocal degree, I would get a lot of training – which would be great, but because composition [the degree] has been so broad, I feel that it’s a real skill.

However, I knew when I started studying composition that I wanted to be a singer; I just wanted to combine the two worlds.

What is something you will take away from your degree, that you really might not have explored otherwise?

Writing music for ensembles. I also found Vocal Pedagogy to be really helpful with my singing, with my posture.

There were some subjects which were maybe not so ‘enjoyable’ and definitely pushed me out of my comfort zone, and part of me feels like it was a waste of time, but the other part of me is grateful for them. Now, I’ve gone to those extremes, so I know what that’s like.

It’s good to explore all aspects of composition to find where you fit in.

Was there much of a difference in your composing ‘process’ for tracks you worked on during isolation, versus those you wrote pre-COVID? (Did not being around people and your usual environments make an impact on your creative thinking?)

All the music I’ve made so far has been solely written and produced by me, so I guess you could say that my music-making has always been ‘isolating’.

The process as such wasn’t as ‘different’ as you might think, beyond isolation influencing the lyrics. I actually showed the track to my composition tutor and got feedback. That was cool, as that was me bringing a ‘contemporary’ side of me into my degree and I got away with that, whereas I actually haven’t felt comfortable doing that before.

I think one of your great talents is writing about romance and passion in a way that is so positive. Do you ever find yourself censoring yourself in your art in order to do that?

I don’t like the idea of ‘hating on’ someone: I think it’s a bit unnecessary. I have focussed more on my feelings in my music, my sadness, rather than anyone else’s feelings, or any anger. I don’t think about holding back, but then again I never want to get into the nitty gritty in my songwriting. If you do that, it distances listeners.

So much art is inspired by romance because it brings about so much emotion, you feel the most, so for me it’s the easiest thing to write about.

Who was Fly Baby (one of my personal favourite tracks of all time) about?

Let every guy think it’s about them.

You write lyrics, you write music, you produce, you film. As a music making machine, do you sometimes get overwhelmed?

I guess when I have a vision of how I want something to be, the easiest way to do that is to just do it all myself.

Collaboration is awesome when each person has things they want to contribute to a larger project and it works for the better but, I mean, as soon as you get someone else on board, their ‘flavour’ comes into it too. Their style is embedded in the song as well.

I have four years of composition training, I’m a singer, I’ve got recording equipment at home (probably not the best) but it means I have ability to do ‘everything’ myself.

Have you made any music plans during COVID?

Back when I produced that very DIY track back in May, I reached out to my contacts to let them know what was poppin’, and also headed into Turramurra music store.

It’s been four months since Josie released the ‘very DIY’ peak-COVID track, All My Friends Have Boyfriends. Pictured: Jofi and her parents in the music video on Youtube, which features the lament: ‘all my friends have boyfriends, while I’m stuck with family’.

– and everyone at that store is really awesome, they’re all musicians themselves.

Anyway I got talking to a couple of the guys there, and they asked to hear some of my music.

One of them forwarded it to his manager. That’s how I got in touch with the manager of the label I’m working with now. I’ve been working with them since the start of June and they’ve been helping me to get my image together. We’re doing a shoot together, I’ve been doing some online music business courses, and also been working on an EP with five tracks. I actually wrote these ones in February. I decided I would dedicate time to them, rather than do a release straight away.

This release will hopefully be my biggest yet!

Interestingly, it was not long after the release of the very relatable tune that Jofi was contacted by a suitor, ‘DM’ing her with the simple but straightforward proposition, ‘I will be your boyfriend’.

They have been seeing each other for the last few months. Better than Tinder if you ask me.